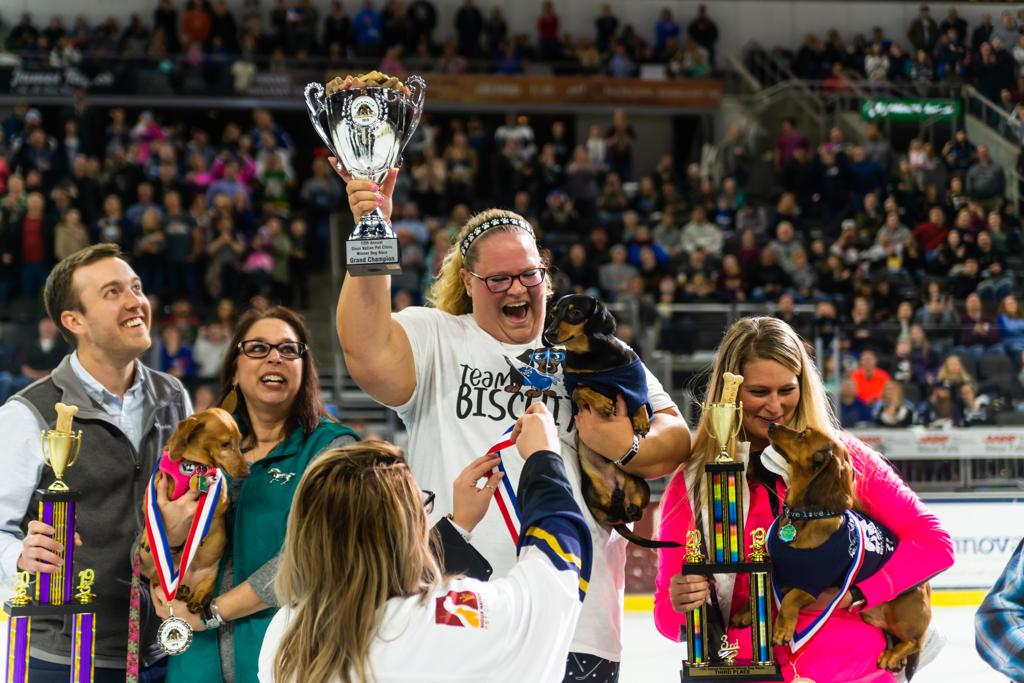 The 13th annual Sioux Nation Pet Clinic Wiener Dog Races take place on Saturday, February 15th at 7:05 p.m. inside the PREMIER Center when the Herd host Des Moines. Many have copied, but this the true original, and best, race! For the past four seasons the race had been held to a sellout crowd of 10,678 fans. Last year, fans witnessed “Biscuit” take home the grand championship. Click here to be taken to the official Wiener Dog Race page with ticket and registration info!

This year, 40 wiener dogs will participate, but only one will be crowned champion!  Awards will be handed out to the top racers in each heat with the top two racers from each heat advancing to the Final Four where one dog will be crowned champion! Dakota Dachshund Rescue will be at the game with some lovable, adoptable dachshunds in the front lobby before and during the game.

Registration is now OPEN for humans wishing to race their wiener dogs. The first 40 registrations received will be entered into the race. There will also be a costume contest that dogs can enter during the second intermission! Please note that ONLY 100% purebred dachshunds will be allowed to register Email your completed registration to: olander@sfstampede.com. There is a $15 registration fee due the night of the race with 100% of the fee going directly to Dakota Dachshund Rescue. There will also be a costume contest during the game as well. Judging will take place during registration prior to the start of the game.

You will receive a confirmation email within 24 hours and exact details on the event will be sent out prior to the race. Each dog must have two humans with for the race, one to release and one to catch.

Please note that it is Denny Sanford PREMIER Center policy that everyone has a ticket to the game. Fans can purchase tickets for as little as $15 by filling out the order form. Dakota Dachshund Rescue will receive $5 from each order to help their rescue efforts!

Players will once again wear specially designed wiener dog jerseys for the game that will be auctioned off with proceeds benefiting Dakota Dachshund Rescue. For more information on the race, please email Jim Olander at: olander@sfstampede.com or call the office at 336-6060.