It was all Gold in the first half of the game, as they went into the locker room with a 3-0 lead. Their first goal came from John Hirschfeld (St. Cloud Cathedral High School) with an assist from Taylor Bothwell (Waterloo Wolves), while their second goal was an unassisted tally from Brady Ingebritson (Hill-Murray). Blake Markwell (Chaska High School Varsity) netted Gold's third of the game, with helpers from Brooks Siemens (RHA Nationals U16) and Merril Steenari (Sioux Falls Stampede).

Gold added another in the second half, with a snipe from the top of the left circle by Zachary Moser (West Fargo Sheyenne Mustangs), assisted by Zack Sharp (Chicago Mission U16).

Green finally got on the board when John Schoenborn (St. Cloud Cathedral High School) cleaned up a loose puck in front of the net. The assists were credited to Kason Muscutt (Dallas Stars U16) and William Kane (Stillwater High School). Alex Gelhar made it a 5-1 game for the Gold with a sharp angle shot, the helper coming from Javon Moore (Minnetonka Skippers).

Adam Johnson (Danbury Jr. Hat Tricks) started in net for Green and played the first 18 minutes before being replaced by Gavin Renwick (Neepawa Titans). Malachi Klassen (Winkler Flyers) played until 18 minutes remaining for Gold before Johnson took his place between the pipes.

Both teams left the ice after the first half in a 1-1 tie. Ryan Arnold (Sherwood Park Crusaders) had Red's goal, with assists from Evan Arnold (Sherwood Park Crusaders) and Zach Nehring (Shattuck St. Mary's U16). Cole Miller (Sioux Falls Stampede) shot a rocket of a one-timer from the left circle off a great feed from John McNelis (Little Caesars U15) for Navy's tally.

Returning for the second half, Trent Anfinson (Sioux Falls Power U16) had two quick goals for Navy. Both primary assists went to Nathan Whipkey (Philadelphia Jr. Flyers U16), while the secondary assist on Anfinson's first goal was credited to Trey Dionne (Jr. Gamblers U16).

Adam Stevenson (Phoenix Jr. Coyotes U16) played the first 18 minutes for Red before Hobie Hedquist (Port Alberni Bulldogs) took over in net for the remainder of play. Ryan Manzella (Sioux Falls Power U18) was between the pipes for Navy until 18 minutes remaining in play, when Stevenson came in to complete the game.

Sky Blue kicked off scoring in the first half of play with a goal from Troy Pelton (CP Dynamo U18), with assists from Luke Matthews (Chicago Mission U15) and Joshua Giuliani (Maple Grove Senior High). They headed to the locker room with a 1-0 lead.

White answered back in the second half with a shot right in front of the net by Brett Tataryn (OCN Blizzard), the assists given to Ivan Zadvernyuk (Los Angeles Jr. Kings U18) and Daniel Tokariwski (Winnipeg Thrashers U18).

White would tie the game up again with an unassisted tally from Karsen Dorwart (Sioux Falls Stampede). Neither team was able to score during overtime play, so the game ended in a tie.

Caleb Heil (Sioux Falls Power U16) stood strong between the pipes for White while Liam Sebek (Ohio Jr. Blue Jackets U18) was in net for Sky Blue.

The first game got off to a slow start with the first goal coming with 3:30 left in the first half. Trey Dionne (Jr Gamblers U16) cleans up the loose change out front with the assist from Drew Bailley (Carolina Rage U18). Navy struck again with three seconds left in the first intermission with a nifty passing sequence that included a goal from Brock Behrend (Luverne) and assists from Paul Minnehan (Northeast Generals) and Connor Miller (Ohio Jr Blue Jackets U18) for the 2-0 lead.

Team Gold finally got on the board with 14:30 left in the second with a goal from Jack Kurrie (Maine Nordiques) and assist from Shawn Duan (PAL Jr Islanders Elite), which brought them within one. However, Navy would respond with two goals one minute apart to stretch their lead to three. Those goals were scored by Drew Bailley (Carolina Rage U18) with the assist from John McNelis (Little Ceasers U15) and an empty netter by Samuel Tsao (Millbrook School Varsity).

Gold would steal a goal at the end from Javon Moore (Minnetonka Skippers) and he would be assisted by Cooper Johnson (Dodge County Wildcats).

Adam Johnson (Danbury Jr Hat Tricks) started between the pipes for Team Gold and the second half was Gavin Renwick (Neepawa Titans). Navy had Ryan Manzella (Sioux Falls Power U18) for the entire match.

This game was busy from puck drop with 5 goals scored in the opening 28 minutes. Joseph Manning (Chippewa Steel) scored one minute in to put Team Green in front. Jake Cameron (Sioux Falls Power U18) scored four minutes later with an assist from Cole Chrisitian (Duluth East) to put Team Green up 2-0.

Sky Blue gets on the board with a nice cross-ice pass from Grant Dillard (Bishop Kearney Selects U15) to Keaton Weis (Rogers Bantam AA) and he was able to one time it home. Team Green would respond, however, with two more goals from Jack Reimann (Unassisted) and Andrew Dwinnell (St Cloud Catheral High School). Benjamin Likness would be credited with the assist on the Andrew Dwinnell goal which had Team Green up 4-1 at half.

Sky Blue fought until the end as they scored two unanswered to pull within one goal. The first goal came from Jack Thomas (Islanders Hockey NCDC) with the primary assist from Tyler Teasdale (Winnipeg Blues) and the secondary assist from Ryan Gordon (Northeast Generals). The second goal came from Troy Pelton (CP Dynamo U18) with the primary assist to Charles Simmons (Northstar Knights U18) and secondary assist to Keaton Weis (Rogers Bantam AA).

With 45 seconds left in the contest, Sky Blue pulls their goalie and Michael Quinn (Sioux Falls Stampede) of Team Green is able to capitalize on the opportunity and seal the 5-3 Green win.

The starting netminders for this matchup were Malachi Klassen (Winkler Flyers) for Sky Blue and Caleb Heil (Sioux Falls Power U16) for Green.

The first half was a low-scoring, fast-paced battle with both teams fighting for possession of the puck. Ivan Zadvernyuk (LA Jr Kings U18) of Team White tallies the first goal and Karsen Dorwart (Sioux Falls Stampede) gets the assist. Team Red would even things up at 1-1 before the half with a goal from Ryan Arnold (Sherwood Park Crusaders) and an assist from Jaksen Panzer (Sioux Falls Stampede).

The second half was quite the opposite from the first half with a back and forth affair. Ivan Zadvernyuk (LA Jr Kings U18) tallies his second goal of the game with the assist from William Dosan (West St Paul) to Give Team White the 2-1 lead. Team Red responded with a William Seymour (New Prague High School) goal, assist to Cameron Bullinger (Fargo Davies High School) to tie things up at 2-2.

Team Red took their first lead of the night by scoring two goals in the final two minutes to seal it. The first goal was from Cameron Bullinger (Fargo Davies High School), with assists to Nikita Ushakov (Little Ceasers U16) and Ryan Arnold (Sherwood park Crusaders). The last goal would be an empty-net goal from Ryan Arnold (Sherwood Park Crusaders) with assists going to Jaksen Panzer (Sioux Falls Stampede) and Shae Gavin (Mankato East Varsity).

The starting goalies for this matchup were Liam Sebek (Ohio Jr Blue Jackets U18) for Team White and Hobie Hedquist (Port Alberni Bulldogs). In the second half, Adam Stevenson (Phoenix Jr Coyotes U16) took over for Liam and Team White. 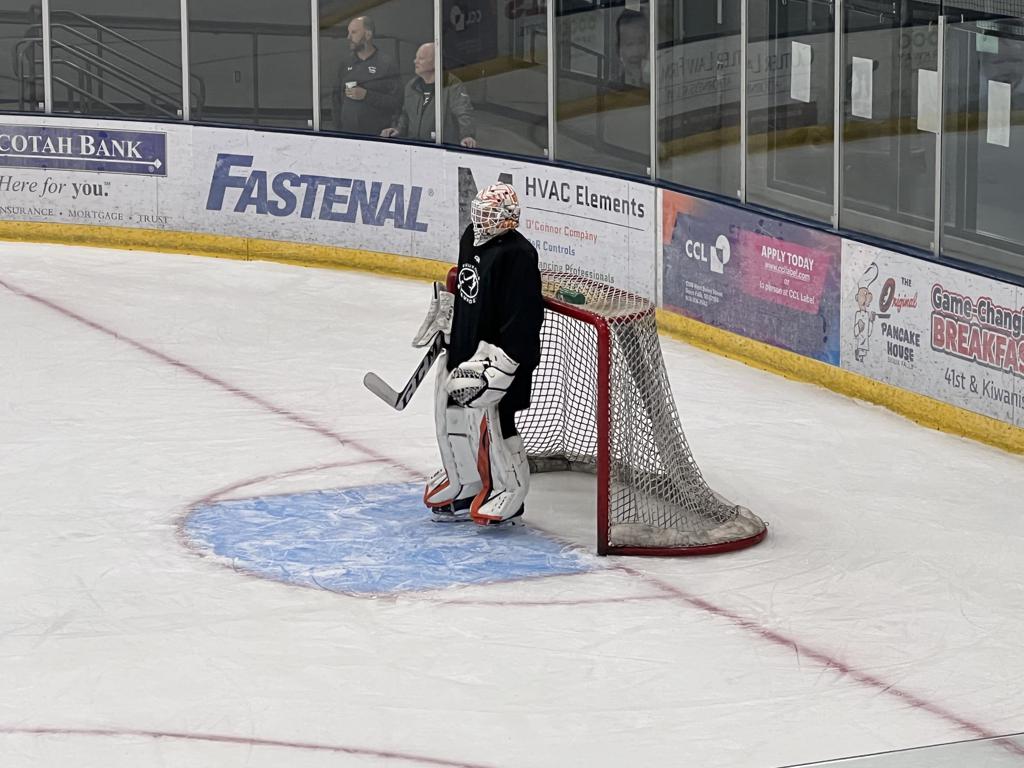 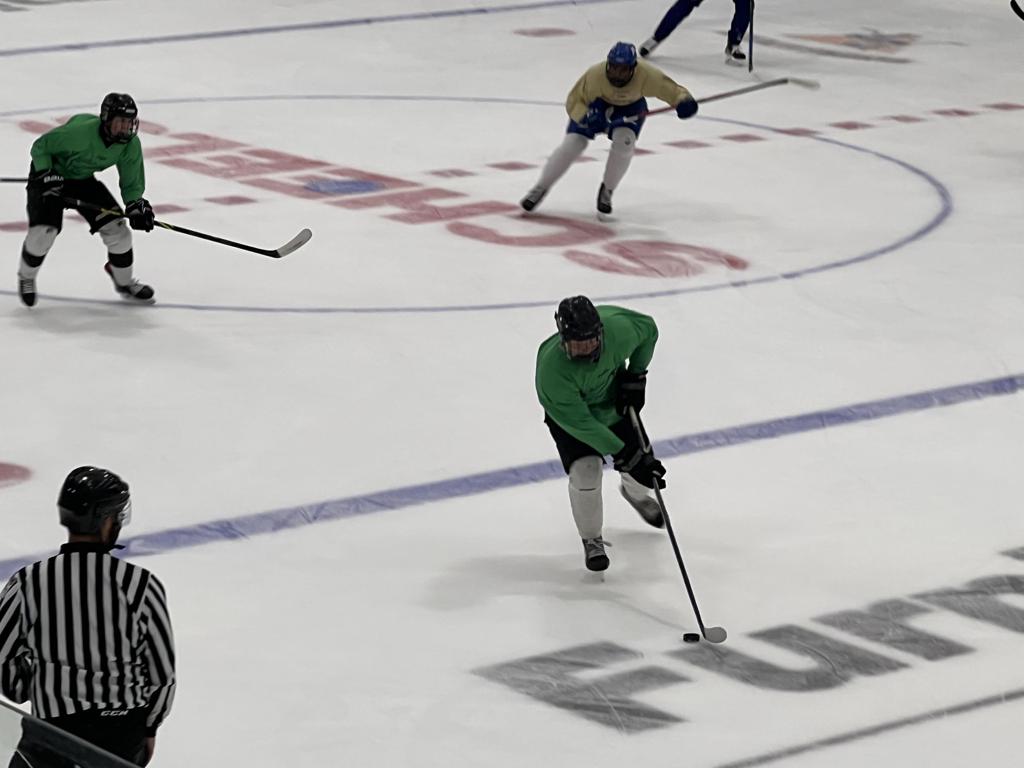 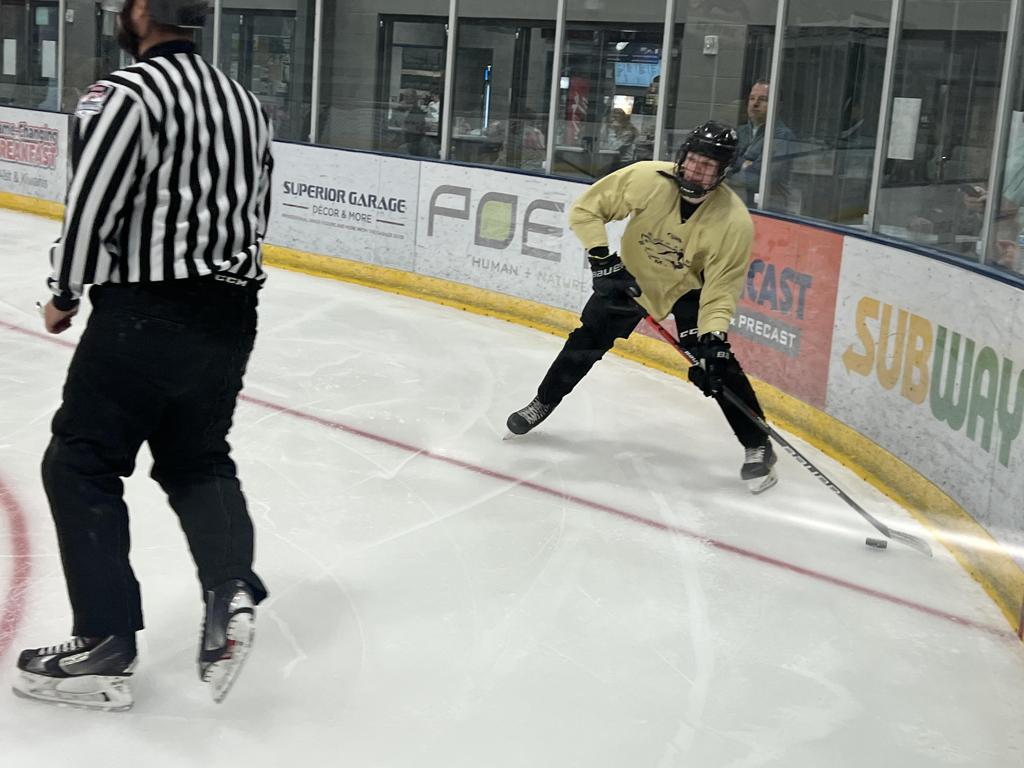 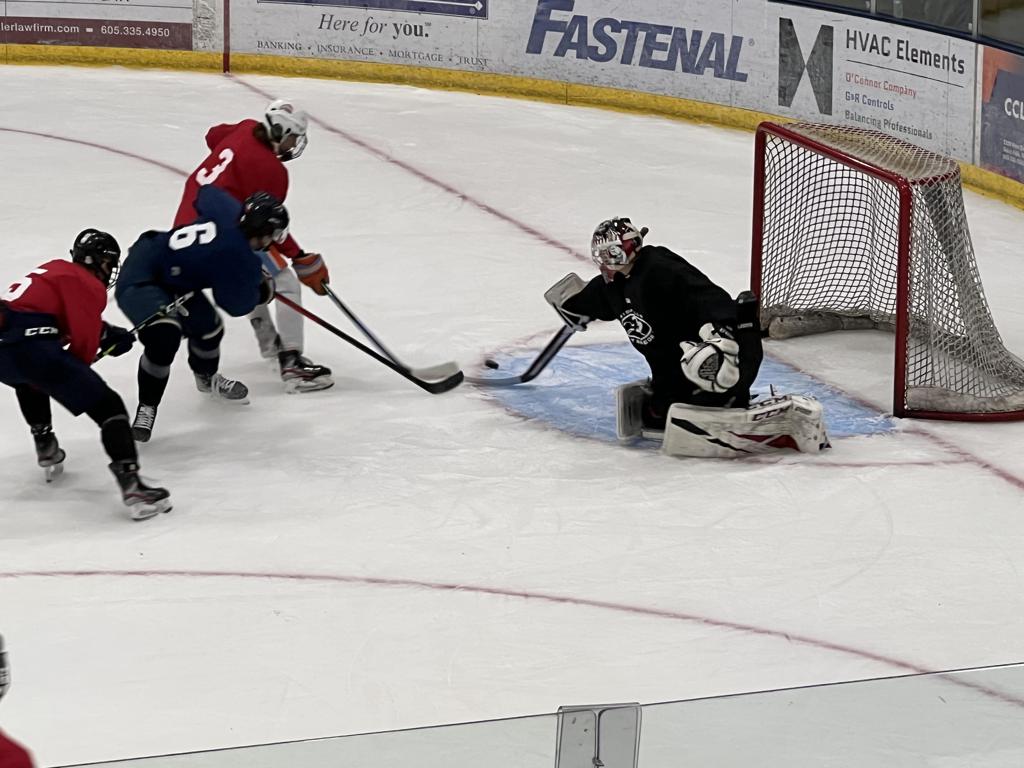 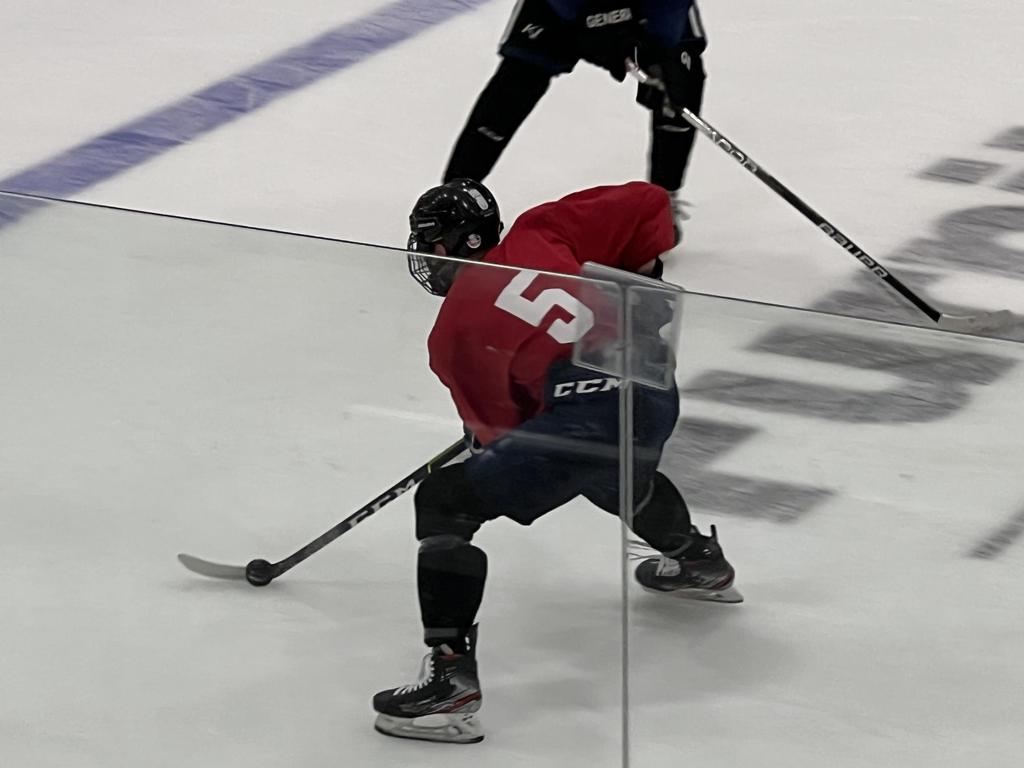 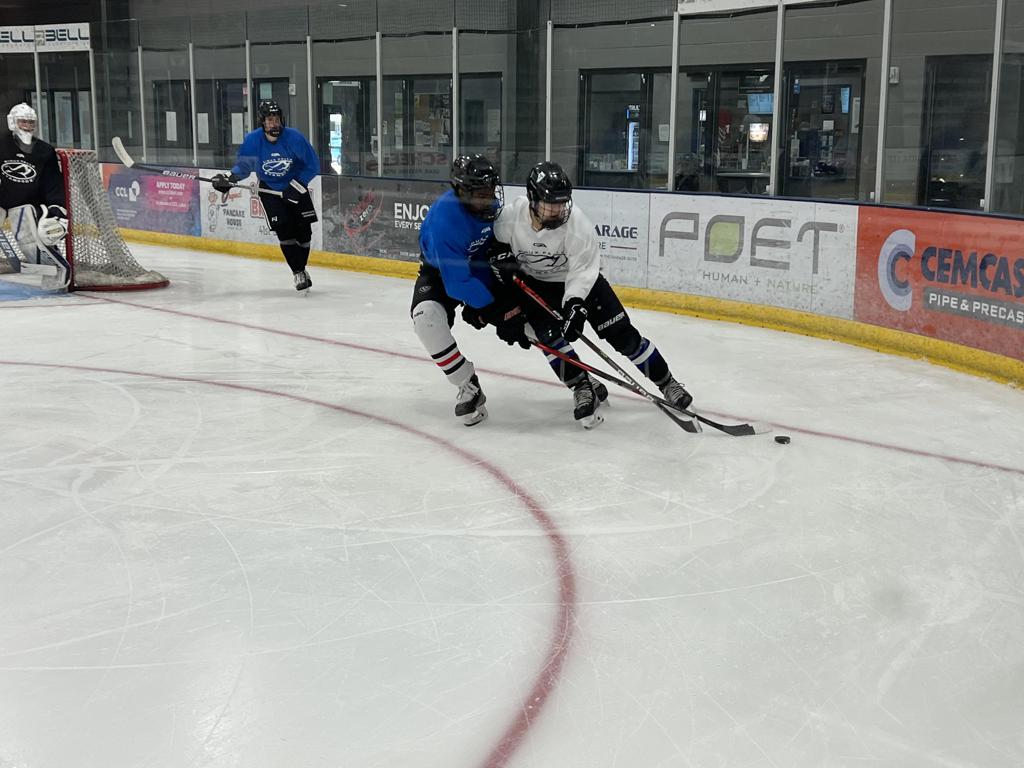